Handling mouse and keyboard of your system using python is easy with pyautogui package.

In this article, i'll show how to use this package to handle mouse and keyboard with python using pyautogui. 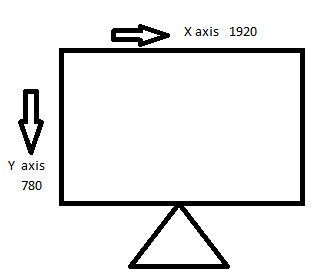 Monitor is treated as a graph of x axis and y axis and every position on monitor has co-ordinate in x and y axis, it is accessed by this co-ordinate.

Now, we can start implementing functions one by one.

This function is used to get Screen resolution.

It will give you the size of the screen.

This will move your mouse pointer from it’s current location to coordinates (100, 100), taking 1 second in this process.

This will move mouse pointer at (0, 50) relative to its original position.

This will print the current position of mouse pointer wherver it is, at the time of execution of time.

They perform similar to moveTo and moveRel functions, except they hold the left mouse button while moving, thus initiating a drag.
This functionality can be used at various places, like moving a dialog box, or drawing something automatically using pencil tool in MS Paint.

It scrolls the active screen up to 200 pixels.

It will type Hackesfridnd at coordinates 100, 100 on screen.

It will press left ctrl and “a” simultaneously. Thus in windows, this will result in selection of all text present on screen.

How to return JSON Encoded response from Django View

How does django prevents clickjacking ?

How to redirect using javascript

Convert a number to a string in C - best way

Python Get length of a string